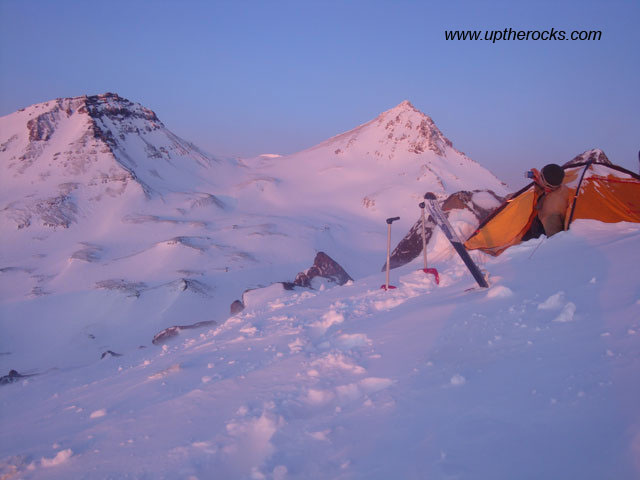 With an aim to explore a new Ski-tour route for Geographic Travel Club Andranik Miribyan, John Clinton and me set off to the village Aragats.

The plan was to include skiing on the slopes of the Northern (4090m) and Eastern (3916m) summits in the program. It was also decided to start the Ski-tour early in the morning from the start point (hydroelectric plant on the slopes of the mount above village Aragats). But Ando’s Niva got stuck in the caterpillar snow trench on the way and we spent hours there to tow it back to the village.

However, we started to move at 2:30pm from the point near the village and tried to keep staying in a good mood thinking all the troubles were behind and good weather with fun skiing are ahead.

We really did enjoy the first day:  there was no wind and no any cloud in the sky, though we couldn’t reach the camp point below the north-west saddle which was planned for the first day. On the second day in the afternoon it started to blow.  We didn’t manage to reach the camp point on that day either. After having some fun in the night storm we finally managed to set the camp on 3460m and to get in the tent at about 9pm.

Third day was stormy too, so three of us stayed in 2+ Marmot “Up High” tent all the day long.

The morning of the forth day was a present for us. After the storm it was a sunny and clear day. John was sick and tired of this uncomfortable stormy trip and also needed to get to office for a work, so there was no other option but going back down. We had some 12 km slope with good snow.

We will try to perform the program after March 10, so we hope next time the summits will work out!