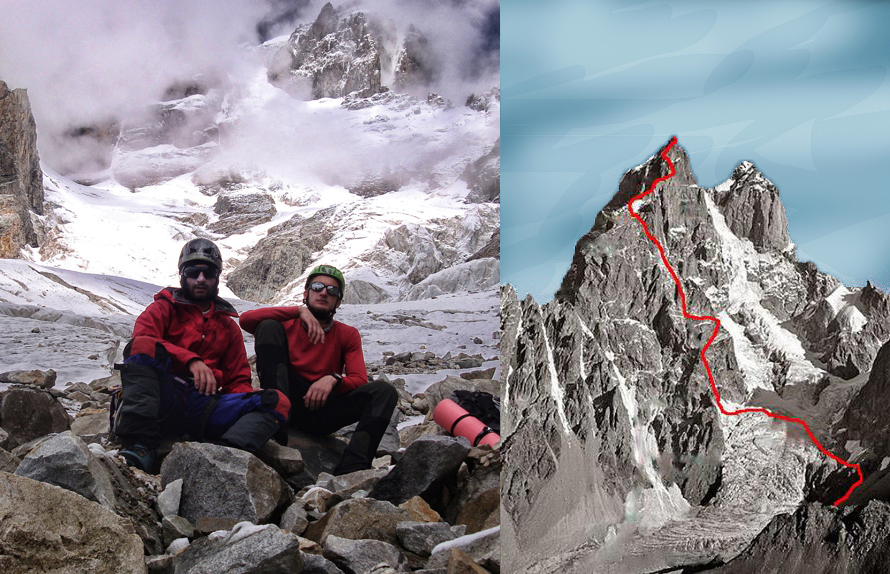 When two guys, who had never met before and don’t know much about each other (besides couple of g-mails) immediately set of to climb a serious mountain from the meeting place – they call it “nonsense” in mountaineering, you will agree!

This is the story of us, Andreas Pfeif and me, enthusiastic people with a mutual friend Nasim Eshqi (you must know this cheerful girl if you have ever been at Jo.Si.To camp) who had linked us by e-mail. We both had planned to travel in Svanetia at the same time, having no climbing partner and were very ambitious not to miss this season to Go Big. I think this was our only desperate and unserious reason to go for it, and luckily we have managed it smoothly, with precise level of adequacy to each other in the “mountain circumstances”.

So, we met at the central park of Mestia, capital of Svanetia, on Aug 19, did some shopping, charged the mobile and camera batteries and drove to Mazeri, from where we should start the approach to the mountain. The destination was the South peak of Mt. Ushba (4710m) by Gabriel Khergiani route, rated as 5B (Russian grading system).

I won’t bother you telling about adventures, you should know how it goes if you have ever been on mountains like Ushba is. If not, then just enjoy pictures and the film ;) I just would like to express our gratitude to local Svani mountain-guides Nukzar and Giorgi Niguriani’s, Idris Khergiani and Afi Gigani , who have hosted us kindly and consulted about route and the mountain (both me and Andreas were the first time on Ushba and even on any technical climbing on Caucasus range).

In the last couple of pictures you will see us with an old man, who also examines our equipment. He was one of the best and famous Svani mountaineers Zakhar Mushkudiani. He saw us parking/camping at the central park (we had run out with money for hostel and food ;) and hearing about our success approached to congratulate us. That was a moment of honor and blessing... Later Zakhar Mushkudiani started to examine our equipment with an amazement, telling the stories of woolen outfit and hardware, in which only few carabinners were already weighting few kg’s..

The editor of Risk.ru, Elena Dmitrenko has asked me to write a bit detailed about teams and ascends we saw on Mt. Ushba as a chronicle of the season, so I will end up with sharing the pure info we have as “statistics”:

On Aug 14, have picked up three mountaineers from Ural on the way from Becho to Mestia. They had been coming down from North Ushba 4694m (by a classic route 4A). According them, the Iranian group attempted by the same route, but they had turned down from Ushba’s “shovel” being exhausted to walk few days in a deep fresh snow. On Aug 21 at the camp 4200m on South Ushba we met three mountaineers from St. Petersburg. They had been rappelling in the dark from the summit and hurried up to find a ledge to set up a tent, so just greetings and good nights..!

On Aug 23 we met another nice group from St. Petersburg on the way to 4200m from summit, they were climbing up. We also met with them later at 4200m and basecamp. They were 4 (Dmitriy, Sergey, Andrey, Alexandr) guys and a girl, who had been waiting for her friends at the basecamp. The same time, on the descent day from camp 4200m, a Georgian group from Tbilisi had been waiting for the weather to do the summit, but unfortunately weather had already changed badly. After two days in Mestia, Georgi Niguriani told that they were going to retreat from 4200m that day. According to Georgi, another team from Tbilisi was going to attempt the same route the following days, but I don’t have any info whether they did it or not.

Another three guys from Germany attempted the North Summit by classic 4A, but they had to turn back from the plateau camp due to bad weather.

P.S. After our trip we heard that another couple from Russia had been lost without any info on the classic route. Unfortunately the search and rescue works didn’t give any results..