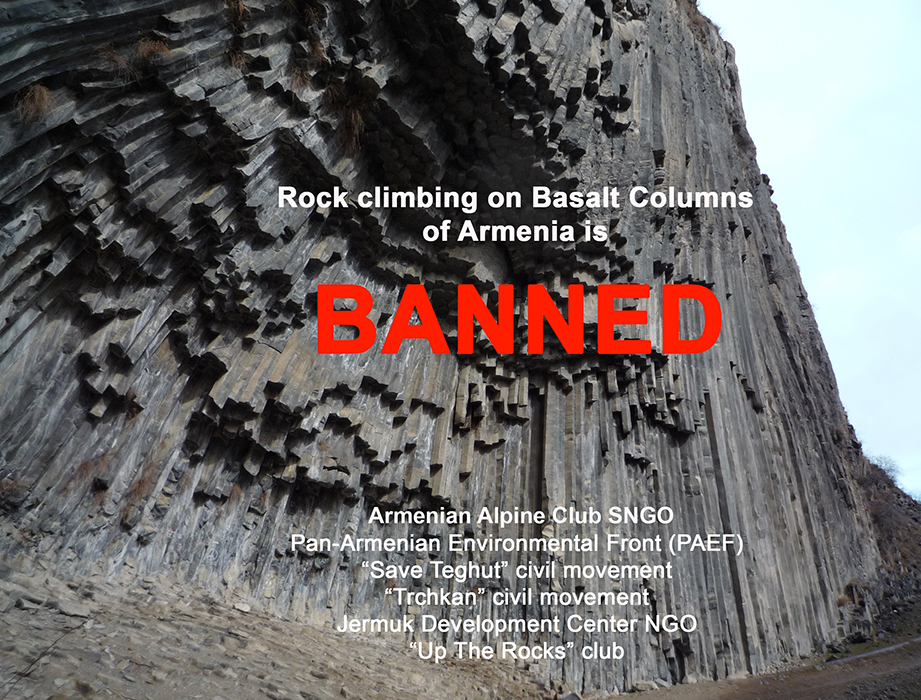 Rock climbing on Basalt Columns of Armenia is banned

Considering the fact that rock climbing on the Basalt Columns of Armenia causes a negative impact on their natural state, the birdlife on them and as well on the surrounding areas generally, few environmental-civil movements with local climbing club and Armenian Alpine Club are firmly against rock climbing on these rock formations anywhere in Armenia.

The current decision is based on the experience of the club “Up The Rocks”, which had been putting its efforts to develop a conservative style of climbing on the columns since 2009. Since the beginning the climbing was developed by “Clean Climbing” manners, only accepting bolts at the rappel anchors. Later, since 2012, after some environmental discussions, the conclusion was made that the bolts, even only on rappel anchors, are harming enough. To escape using bolts on rappel anchors when putting new routes, pro-gear was used as a temporary solution. On 2013, V-thread and I-thread anchors where successfully tested as a possible solution which could be later approved by environmental experts.

The idea of new anchor systems had two privileges:

- These are eternal rappel anchors with single impact on the rocks, unlike the bolted anchors that require to be re-bolted every other 20-30 year.

- Being challenging and not as much safe as bolted anchors are, it should make climbing on basalt columns non popular, allowing only very limited amount of skilled     and experienced climbers dare to climb on them. Limiting this way the amount of climbers should also mean less impact on the sensitive rock formations and           surrounding areas.

However, the experience showed that even world class climbers tend to skip the rules and use bolts, and it is actually impossible to keep under control. Along with this statement, club “Up The Rocks” takes responsibility for cleaning all the rappel anchors were put so far.

“Up The Rocks” club