Written by Mkhitar Mkhitaryan, Published: 19 May 2008 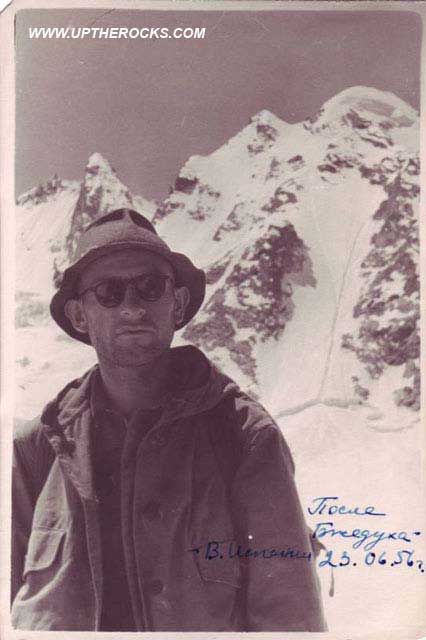 In 1945 graduated fromKirovakan Agricultural College with honors. In 1948, after having worked for three years, he entered Yerevan State Institute of Physical Culture as a gymnast and graduated from it in 1952. Afterwards he was employed as a senior lecturer there. He had worked as an associate professor at Yerevan State Institute of Physical Training since 1982 and has been working as a professor since 1999 up to present. He is an honorable member of the Armenian National Olympic Committee, as well of the club Up The Rocks. In mid 1950s he was awarded with the title of Champion of the Caucasus several times (Armenia, Georgia, North Ossetia, Azerbaijan and Dagestan) and held the All-Union Championships of rock climbing. In 1952 at the Caucasus Championship of rock climbing in Arzni, Armenia, he won a victory over the legendary Soviet Union climber Mikhael Khergiani from Svanetia by 41 seconds and took the first place, but this fact is noted only in the October issue of the newspaper “Communist” (October 30, 1952) and nowhere else not to overshadow the legendary Khergiani.  He was an instructor of alpinism since 1953 and senior instructor since 1956.

In 1956 he became vice champion of alpinism of the USSR in the group led by Terro Rem with Ira Koreneva and Oleg Romanov, and though their team was the victor of the traverse category (traverse of Shkhelda-Ushba 5Б by Russian estimates) the title of winner was bestowed to another team. He has been granted with the title of Masters of Sports, has also been a member of the Soviet Union Alpinism Team since 1958.  He has had a lot of hard technical climbs in the Caucasus as well in the Pamirs, the Tian Shan and the Alps.

He has taken part in more than 40 mountain rescue operations in the Caucasus, the Pamirs and the Alps.

In 1958 participated in Soviet-Chinese expedition in the Pamirs which was organized to carry out preparatory works for joint climbing to Mt Everest in 1960 but it didn’t take place because of the worsening relationship between those countries.  He remembers the meeting with Vitali Abalakov in Gorky, Moscow in late May, 1960, who was very upset. To his question what had happened Abalakov answered embracing him “We trained the Chinese and didn’t climb Mount Everest. Instead they have …”

From 1959 to 1961 he worked at the Mountaineering School headed by Vitali Abalakov.  He remembers Abalakov often joking about him “the most high-priced instructor” since he had graduated from the Institute of Physical Culture and earned 20 rubles, while Abalakov and the others earned only 15.

In Armenia the group led by him (Sergey Arutyunov, Kim Galoyan and Gevorg Khachatryan) made since then the first an last ascent of the North Wall (about 800m) of the North summit of Mt Aragats(4100m).The climb took them about 12 hours and an hour down to the camp.  He remembers the strange part on the route – 7-8 m horizontal soft line crossing the entire wall along. “It was like cheese, I had never seen such, and there was nothing to cling and nowhere to place a protection, however, we passed it somehow..”

They estimated the route 4А by Russian mountaineering scale, but it was considered 5A as first ascent His last hard route was the famous one called “Ushba’s cross” in the group led by Borov (Kharkov) with Eric (Leningrad) and Volodya (Sverdlovsk) in 1961. Unfortunately he can’t remember their surnames. “50 years have passed” he says.  He was the sole leader for all the pitches during the climb estimated 5Б and plus 1 degree as first ascent (6A).

After becoming the trainer of the biathlon team of Armenian in 1961and hokey team in 1980 he forsook alpinism. “I was appointed team trainer, and couldn’t go on with alpinism, as we were traveling for meetings and competitions during the whole year”.

To my question “You’ve had so many hard climbs, didn’t you face any extraordinary incidents during those?” He replied “You know I’ve done so much but never got a scrape or have had a bleak night; everything I’ve done had been meticulously calculated and planned in advance.  I wouldn’t do anything if I knew that would have a fall of 5cm”.

Afterwards, he told some short stories he didn’t attach much importance to but they revealed his venturesome and ambitious nature.  “I used to climb fast and intensively and didn’t like slow partners. Waiting for the team members to reach me always seemed an eternity to me and sometimes I would untied the rope and throw down to them and make my way up the crags alone, then would realize fully that it was sheer stupidity”.

He also confessed that never took off the backpack while leading the pitch as the lead climbers usually do.  “I did so only once on the Ushba’s Cross, when there was 2-3 m chimney on the route line I had chosen. From below the rocks seemed clean but on reaching them I found out that they were covered with transparent ice. That was the first and only time I took off my backpack as it impeded me”.

His fond memories of those years are evoked by the few preserved pictures and data of the climbed routes in the Caucasus (Pick  May 1- 5Б; traverse Shkhelda-Ushba – 5Б; Ullutau-Chana 5Б; Ushba – 5A; Shkhelda – 5Б; Dombai-Ulgen – 5a; main Amanauz by the South Wall – 5Б; Ushba’s Cross – 5Б first ascent) which he saves with care.

He is still angry at his friend who took from him 35 films, photos and data of his technical climbs to publish and didn’t.  “Now he lives in America, so I think the films are already lost”.  He’s given me several photos to scan some of which he doesn’t remember where he took.  “50 years have passed ….” he repeats.