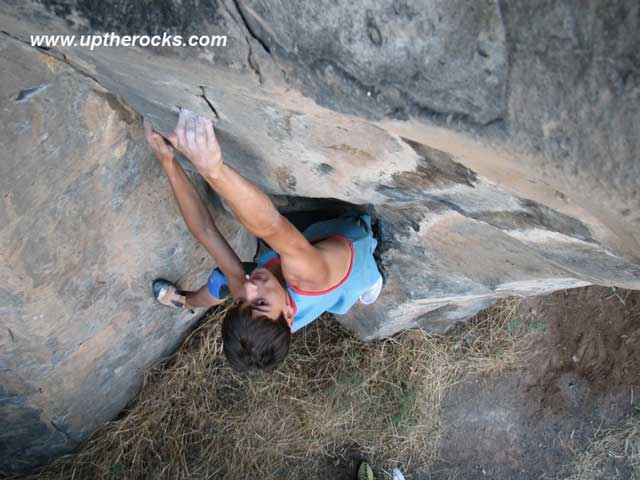 Last summer in July-August, 2007 I spent my holiday in Armenia Hrazdan town not far from Yerevan with my relatives.

My son was eager to join me, but that time he took part in Climbing European Youth Cup championship in Poland. At last he had an opportunity to fly to Armenia for a fortnight's holiday.  Just in case he took with him some topo pics (the internet search results) of Armenian climbing routs in Arzni, Bjni, Noravank.

We took a taxi and make the southern rocky parts of Armenia.
We walked around up and down among those gigantic rocks finding nothing of the kind then.
After the long quest for those climbing routes, we decided to take a short rest and have a bite in a nice coffee located near the bridge on the soundly river under the oak trees in the open air (…it was marvelous!!!) We looked through on a menu… delicious and gourmet food, such as roasted fresh fish ‘Ishkhan’ (trout ), kebab with lavash (Armenian bread) and spices and many other appetizing food…

We were delighted with the nature surrounded by highly proud rocks and clean air. Suddenly  we noticed some people nearby settled down climbing. They were members of Armenian “Spitak” rescue team-Mkhitar with his friends and guests from America. And it was the beginning of our acquaintance.

…Next week Mkhitar organized bouldering in Hrazdan canyon inviting my son, me and pretty couple Ando(photographer) and Vergine there. Here are some Ando's photos of that unforgettable day: