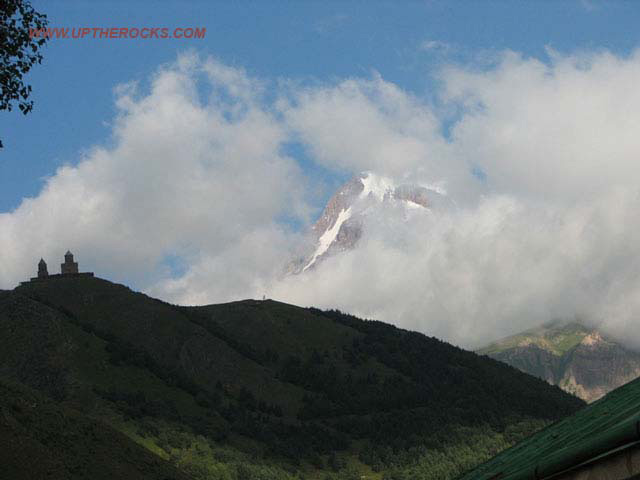 On the beginning of August, 2007 our Armenian friends from Iran Sourik Stepanian and Araik Jahanian came to Yerevan to set off for Georgia, to climb up Mt Kazbek (5033m) with ‘Spitak’ rescue team members.

Andranik Miribyan and Karen Hamamchyan joined the team, I was also willing to do so but unfortunately my work didn’t let me free.   With backpacks loaded in Ando’s Niva the team set off. Next morning, loading the baggage on horses, they started to climb up to the Kazbek hut on 3600m.  Despite the team stayed in the hut, Ando decided to camp like a traditional style. There they met also old Japanese lady Yukon Tobey, the first woman who climbed Mt. Everest. They were on Kazbek after visiting Armenia and climbing Aragac (4100m).

Next morning the weather was pretty good – sunny, no clouds, no wind but the team intended to have a free day for an acclimatization and the next night to start the climb to the summit by the traditional tourist route (2A) by Russian rate which goes on the glacier with deep cracks escaping the steep slopes and crags of the summit and then from behind starts to lead by a less steep slope to the summit. All the mountaineers of the base camp were enjoying the sunny weather gathered at the hotel when Ando noticed the attractive and short route to the summit (3Б) 45-55 degree ice slope which nobody goes from second part of July to end of August because when its warm from the both sides of the crags rocks run down like bombs all the time.

As Ando knew that his team wouldn’t climb that day without acclimatization and especially exposed to the rock fall, he began to look for partners from Georgian team but no one agreed to climb with him.  Then he said Karen about his intention to climb the rout alone. As a leader of the team Karen refused him and it was quite a logical decision, apart from the rock fall there were some other reasons for it – climbing alone; it was about 11am when mountaineers usually get on the route at 3am..

Anyway Ando was firm in his decision and after writing down his responsibility about his actions, he took just an axe, a rope and ice screws for self belaying, one Snickers, one loaf of gata (Armenian pastry), down jacket, photo camera and started his ‘Express’ climbing with a strong hope that he would be back to the camp at night. To save weight, he took neither a tent and backpack nor water tea. The route is right in front of base camp and when Ando’s figure appeared on the slope all the people of the camp gathered together enjoying his climb.

“The ice slope was steeper than I thought, and the rocks were running down like shells and I was looking up all the time to escape from those, I felt myself like Mario in computer game.  I was not at ease ‘cause I was not acclimatized enough, so moved very slowly.

To use ice screws with a rope for safe belaying would take a lot of time, so I decided not to make use of them and just go ahead.  It was about 6pm and I had hardly climbed about 2/3 of the route. While climbing I realized that the situation is more difficult and dangerous than I had pictured and I had a sudden feeling of responsibility for my wife as we had been married only three months. So I could not play with my fate as before. I was awfully hungry as hurrying I didn’t eat sufficient in the camp. As gata turned out to be quite inedible (it was old and hard) without water, I ate the Snickers and hurried ahead.  Every time it seemed after a hundred meter I would get to the top but every time I found out that it’s farther than seemed.  Hardly had I got to an apparent top when found out that wasn’t the real top, noticing the real one behind it. It was strange that nobody had told me that the top of the route we see from base camp is not the real one. Anyway, I decided to climb there and went down by the classic route to lose some hundred meters of altitude then find a place for sleeping (rather than waiting for the morning). I had passed the steep slope and comparatively it was easy and safe to move but I felt nausea though decided not to vomit, because did not have anything else to eat. At sunset worn and broken I roamed on the summit. After having a little rest I decided to go down by the traces I saw. Soon the traces divided in two and it seemed to me that the trace on the left should lead to the steep slopes and trace on the right to the classic route. I took the right one.

After walking enough by the traces I find out that I’m not losing the logic altitude as I should, the way I walk didn’t look like the slope leading down. I walked down then a little up and then down then again a little up…

I walked on the ice when in the light of my headlamp watching from side I find out that I’m staying on the ice cornice.  The classic 2A way couldn’t pass on ice cornice ledge and I recognized that the team of theirs took another route traversing the ledge. Further I found out that it was the traces of Russian team traversing to the Spartak peak. I decided to walk back looking for a convenient place for passing the night. Finally I saw some rocks near the top, getting them and having a little rest, decided to pass an hour making my camp a little comfortable by the boulders, also not to be frozen by moving.  Finishing it I lay the rope on the rocks as a mattress and the cover was my down-padded coat. Finally I could try to sleep and to do it I had to do just last thing – make water.

…oops, it was too late when I got that something I did wrong and the liquid that should flow out was licking in.

-Well, - I thought – everything I do during last day is going wrong but I must survive!

I put my feet in the backpack and trembling from freeze tried to pretend myself sleeping, fortunately the weather stood clear and calm all the night. Finally the sunrise!  I have never seen such …. It was a miracle to see Big Caucasus Mt range at sunrise.  It compensated for every trouble I had.  The weather was fine, all the day ahead to go back and I was lying lazily enjoying the mountains.”

When he got to the left traces on the classic route he found the mountaineers’ team below coming up. They were Souren and Araik with Gia, a Gerorgian guide. Karen had felt sick, probably it was because of the stress that he had no information about his friend and had stayed in the camp.

When they met, Gia told “I was watching your climb yesterday till it got dark, good job!    Next time I will climb with you anywhere with great pleasure.”

The base camp greeted Ando with great enthusiasm expressing their amazement about his climb. When at night the mountaineers made a party he was the favorite.  One of the Persian mountaineers made a present to him, a new climbing suit. Sourik, who knew that Persian guy, was arguing “we have known each other for many years climbing together but you have never made me any present and you know Ando just one day and gave him your new climbing suit”.   Some of Persian guys wanted to give him some equipment else but Ando and Sourik didn’t agree to take.

Well Ando was the favorite of these days in Kazbek base camp but he couldn’t escape from cruel and the same time honest criticism of his team and his climbing friends in Yerevan. No written and legal contract can make free from his team friends’ feeling no moral responsibility for him.