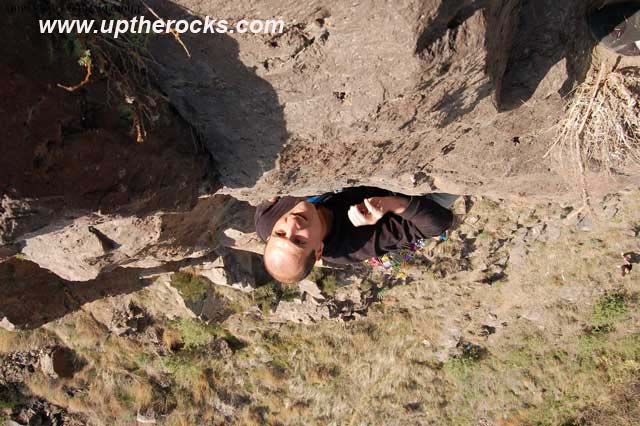 Two years ago Thomas and me were top roping this route under the Physics’ wall (Yerevan Physics Institute) and decided to call it Sev (Black) because of the black part under a small cornice.

The ''Spitak'' rescue brigade had been frequent trainings on these rocks on early years. In January I set up three bolts on the last 10m section of the route to make it safe for trainings (the two of them are 6mm long and 6mm in diameter). But unfortunately on that day the snow above melt and wet the whole route. Consequently we made up our minds to carry it out later.

On a sunny April Sunday Anahit, Miqo, Yulia, Vardan and me gathered to lead climb the route.

It’s 20m high easy route 5b/5.8. But it has small ledges under its small cornice, so at the point of whipper the climber can hit them, that’s why I set up the bolts to make it safer.  I made also an anchor on the steep slope from two bolts below the rote to the right, for safe belaying.

The climber should also have some middle and small size protection gear for the first part of the route.