Ski-touring in Armenia and more 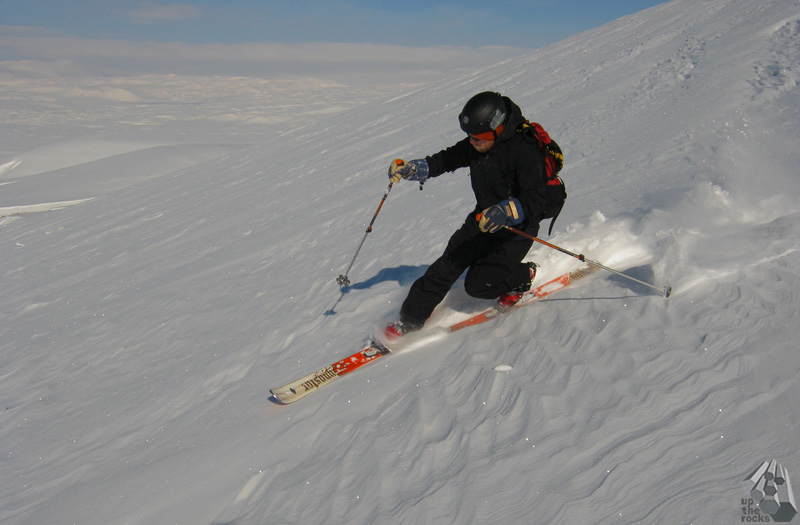 Mystic basalt columns and limestone had been the initial motivation to travel to Armenia, but the potential for outdoor adventures took us by surprise as did the culturel experience.

When not climbing onto the vertical pleasures, the thoughts of exploring the landscape dressed in winter conditions seemed appealing. It was evident; there was no choice but to return with skis, and have some fun with Mkhik and our other Armenian friends. It was in the middle of the night when our driver, Garik dropped us at the side of the road. I just hate alpine starts and this was no exception with the cold mountain wind and darkness welcoming us in the backcountry. But where was the snow? We carried on with our skies on the backpack for some hours but as the sun rose we got a bit disappointed. The snow layer was very thin and rocks were everywhere, but the colours of the morning sun rising over the southern Armenian landscape were stunning and the rising temperature made life easier going.

It was evident that there was snow, but just not very much on the slopes we had been sweating on! Plans were changed and on the advice of Mkhik the car moved towards the small mountain town of Jermuk mostly known because of mineral water springs. Situated over the town was a small ski resort with one short lift and two pistes. Nothing that would impress anybody who had been to the Alps, but snow was abundant and we were the only ones there! Imagine having an entire resort with unspoiled backcountry to yourself! The only problem being that the lift crew would switch of the lift when we were not using it or a few meters before entering the upper station....

If snow had been sparse on the days prior things were about to change. Three days of skiing on the  unspoiled upper slopes and through the forest with snow falling all around us got us in the mood for moving on to bigger destinations, and what better when being in Armenia then Mt. Aragats?

We drove as far up the road leading to the laboratory located beneath Mt. Aragats most southern summit as possible and changed from tyres to skins. In the cold crisp air and with a good already broken track the going was delightful and easy. But as the track disappeared and we got to higher ground the real struggle slowly crept into our increasingly exhausted muscles. In our most optimistic calculations we had figured that we would need approximatively 7,5 hours to reach the laboratory, but when we finally crashed through the front door of the laboratory more then 12 hours had passed. Not that it had in any way felt like we were out on a picnic, we had done a lot of hard work and Lars even got a bit of frostbite. Later we learned from a skidoo driver bringing supplies to the laboratory that the conditions were horrible and that it had taken him almost 4 hours to drive up there, a drive he normally could do in about 30 minutes!

From the laboratory we had a perfect view to the southern and western summit of Aragats, but due to the fatigue from getting up there we chose to stay an extra day at the laboratory in order to get fit for the summit attempt.

The first plan was to skin climb to the western summit but this was changed to the southern summit as it looked like there would be more snow on the latter. From the southern summit the view with the crater, Ararat, the Armenian lowland and the distant Caucasus was breathtaking but after a few moments we got to cold and put on the skies and slit back down the slopes toward the laboratory. In the beginning the snow was very wind packed and combined with the increasingly tired leg muscles turns were both difficult and exhausting but enjoyable. When we reached the laboratory we were welcomed with a good meal provided by the kind staff. The sky was blue an there was not much wind which made us continue to the lowland where Garik picked us up and turned the car towards Gudauri in Georgia.

Gudauri, located in the beautiful and snow filled Caucasus, proved to be a nice venue with plenty of back country potential.  The place is just perfectly located between beautiful mountains that look like they have been created with the sole purpose of skiing! But it was not all powder fun and games, we also had to party with our kind Russian fellow guests from the hotel and had to eat Mr Rezos tasty barbecue..... and drink a bit of his home made blackberry wine.... and drink a bit of Garik's vodka....

With time evaporating at an unreasonable rate we had to head back towards the airport in Yerevan, but on the way we had time to have a thoroughly guided tour through the charming center of Tbilisi provided by Garik who had been living there and had a lot of contacts in the city.

On the very last day the sun had taken control, giving great views and good temperatures. Despite the feeling of being satisfied we had to do just one more summit. Mt Hatis, the mountain looming just outside of the city was chosen. Every bit had been easy an enjoyable until the very last slope where our hearts stopped in a split second when a huge low frequent sound indicated that the very large snowfield that we stood on collapsed.... It was evident that the avalanche risk was high with recent snowfall, winds, changing temperatures and now the frightening sound, so we chose to escape to a ridge and skied it to the village located at the foot of the hill.

No doubt skiing in Armenia is something different then what most people do when they go on skiing vacations. The snow quality varies a lot but with the Caucasus located not that far away it stilt an relative ”safe” destination if you are willing to move around. When skitouring in Armenia or Georgia one should be well equipped with backcountry-gear and have knowledge of how to use it in any thinkable situation. Local knowledge is definitely almost obligatory both in the mountains and when travelling in between them.