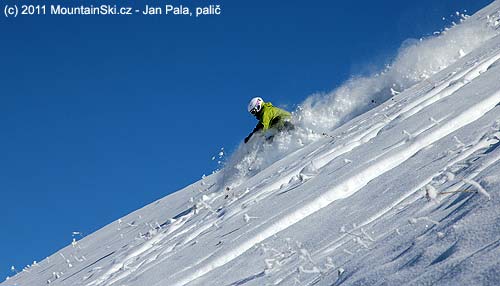 With Jan Pala, we had planned this ski-tour trip in Armenia around a year ago.

On Feb 2 early in the morning I met Alena Denshchik from Kamchatka and our heroes from Czech and Slovak Republics at the airport: Jan Pala (the director), Michal Sventek, Matus Kuchyna, Jan Hajek and Boris Biba.

Hence I started to notice the Czech and Slovakian languages sound a lot like Russian, I caught an expression of perspicacity Matus: “...Armenska muzi zasmusily, jejich oci byly jako Kalasnikov” like Armenian men are sullen, they have a look of Kalashnikov. ))))))) And after some short time I guessed that I was the inzenyr of the group..!!!

After we put the luggage at Envoy Hostel, Jan, Alena, Matush and me set off to my place to mount the bindings on the new “Movement” freeride skis of Alena and mine which Jan had purchased with very good prices. Others felt in a deep sleep in the hostel. Afternoon we set off to our first destination - Tsaghkadzor ski resort. As we got to the ski resort at around 5pm the most part of the way to summit was skin climbed as the lift stopped working.

It got dark and we had kind of nocni lyzovani. All the next day we were skiing there. Sure we did some freeriding but the basic impression about the ski-runs of the resort was poor: ''even the steepest (black) ones were too easy'' – as Alena described it in her website after www.kamch.ucoz.ru. Then we set off to the resort city Jermuk at night. The result of drinking a lot of beer in the van was that we had to stop the car very often to measure the temperature of freezing night..)))

The next two days we had some fun freeriding in the powder of Jermuk - in the wood next to the ski runs and from the small summit near. But unfortunately for us and our skis we met a lot of stones and stumps. Many tumbles and deep scars on the ski basements, and some rest kindly offered to our director by a tree trunk... Next few days we were desperately seeking any good snow on the southern Armenia mountain slopes. It has snowed a lot there till the end of January, but the intense strong winds of the last days have swept all the snow away from the mountain slopes.. :( The part of Ski-alpinism program in Armenia was to traverse three summits in the south: Mt. Khoustoup 3201m, Mt. Tarkatar 3277m and Mt. Aramazd 3400m then skiing from the summit of Mt. Ishkhanasar 3550m.

During the first attempt, on Mt Khoustoup, we had to face the reality. Wind had swept the slopes and a lot of rocks pined in the shallow snow. We had predicted something like that and went by day packs to ski down from the opposite slopes after the summit. We started climbing quite late at 11:15am so when we got the summit comb it was past 5pm. It was less than an hour to walk to the summit, but already late and the conditions didn't inspire us to find good snow on the opposite slopes, so we turned back. The night in the hotel-restaurant in the city of Kapan was extraordinary. After some bottles of vodka Boris made a good theatrical performance for us. We were very close to having some serious troubles with a restaurant staff, but for me the most challenging was to make my self not to crack up and keep my look as strict as “Kalashnikov” was. I hoped that it would work to make Boris calm down.

Another funny story we had at the camp on the Mt Ishkhanasar. As in Yerevan we could find specified cans for mountaineering 3 times more expensive than anywhere else (8 euros per 230g can), we picked up the ones, not specified for mountaineering, by 2 euros. Here we had used those successfully in winter camps before, keeping them warm rolled in the clothes in the bag pack or in the sleeping bags. But these guys were careless about it when I warned them.  And in the next morning they were praying about two hours in the tent, to boil a liter of water from the snow (for me it took about 15min). After I heard that the half of one of inner tents was burnt. According to one of the hypothesis, Boris had released some gas around the stove and it caused a big blaze in the tent… And that hypothesis turned out to be very applicable for Boris. It bore the idea to set up a new brand "BorGas" and produce very cheap cans to be exported to Armenia.

Well, then we returned back to Yerevan to go for heli skiing on Mt. Aragats 4090m. Another two days were spent on the Cosmic Rises Laboratory based on the slopes of the mount at 3200m. When we went to the South peak to check the snow conditions before calling the helicopter, all we found were the same wind swept slopes with moguls and rocks. We had nothing to do but to cancel the Heliskiing program and go back to Yerevan. The next day, on February 13, the group set off to Georgia to try its fortune there. As I heard after, the snow conditions were not the best there as well. Somewhere, on the mountains around Gudauri, they got finally some powder and also 4 avalanches were triggered where Jan Hajek lost his ski in the avalanche debris.

Well guys, the extraordinary snow conditions in Armenia was an like an irony of fortune was probably to keep you away from an avalanche or so, but cheer up, I wish you always to have the best powder snow and weather on your next trips! ;)