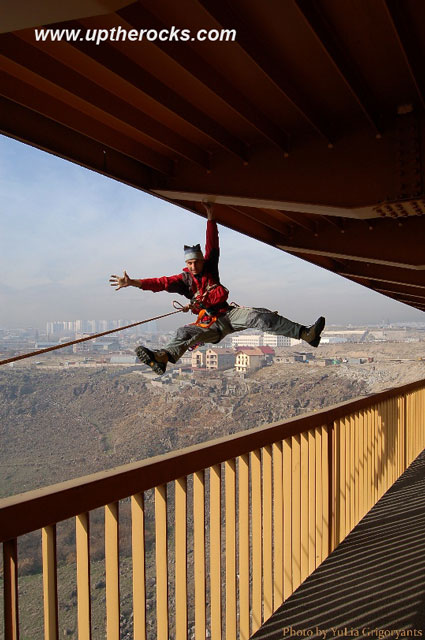 Since I saw Erik Perlman’s film ‘Masters of Stone 5’ in which Dan Osman performs his mad tricks of rope jumping I couldn’t stop thinking to try something like that.

For sure, there are many ‘rope jumping’ clubs in Russia and somewhere else that are jumping swinging and usually with double rope but it is quite far from Dan’s rope jumping. He did it with only single climbing dynamic rope and the trajectory of his greatest falls was vertical like water drop falling. His deepest fall length was 300m. Later he decided to overcome his own record trying to lengthen it up to 335m but something went wrong and the rope tore... Nobody can tell surely what the cause of tearing the rope yet was. The rope jumping is quite far from bungee jumping too. Bungee cord diameters are about from 50mm to 90mm and are tested for 500 jumps or more, yet the climbing single rope diameters are from 9,8mm to 11mm and are tested max 10-13 falls with a fall factor-2 (UIAA standards).

However, there are much fewer rope jumpers in Dan Osman’s rope jumping style than even BASE jumpers. It was the cold morning of the first day of winter when Bagrat, Sahak (our web master), Gevorg, Yulia, David (operator) and me gathered on Davidashen bridge in Yerevan (100m high).  We intended to perform the first swinging rope jumping in Armenia. Bagrat and me jumped with 33m slack rope and had really cool feelings.

Later when I showed the shooting to others, everybody – men, women, old and young – told “I want to try it as well!”.  Some people said ‘it’s madness’ but I do not agree with them. After making a serious competent calculation it’s not more dangerous than passing a street, driving a car or swimming in lake. Next time we are planning to jump 40m with vertical trajectory doubled rope!