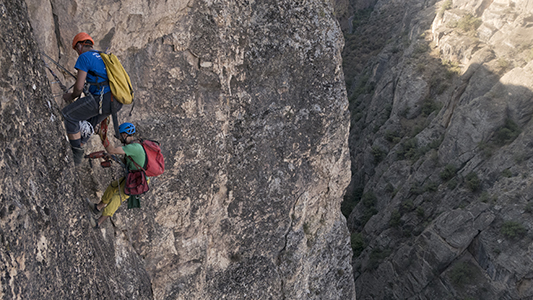 10 new sport climbing routes (14 pitches) we set this September in Noravank Canyon. Our friend Martin Tučka from Czech Republic, who visited to our Armenian Rock Climbing Festival in 2013 and put number of sport routes here, was back again for this project.

Armed with useless drill (in Prague airport they didn't let the batteries to fly with), over 200 bolts, 15 chains and accompanied with lovely Marcela Tučková, Martin fell into his element to drill and brush all the day long, and Armenian sun could do nothing to stop him.

Six of us worked hard during six days to finish these 14 pitches, few of which are the hardest climbs in the canyon. Martin and myself were bolting, cleaning and brushing. Karen Marutyan, Rosa Vroom and Andrey Ralev were fine brushing after us. How would we figure it out without our cheerleader, cook and photographer Marcela I can not even imagine.. The title of most rewarded worker got Andrey, he started to work on the routes right after brushing and sent some of those earlier than me, which made me the most jealous worker here.

The project was supported by Up The Rocks, Armenian Alpine Club, Cambarsport.cz and a good friend Jan Kares. In the pictures below you can see the new routes marked in color blue. To see the complete topo of Noravank Canyon visit here. We'll add a small video of the bolting process in this page soon, so come back later to see it!