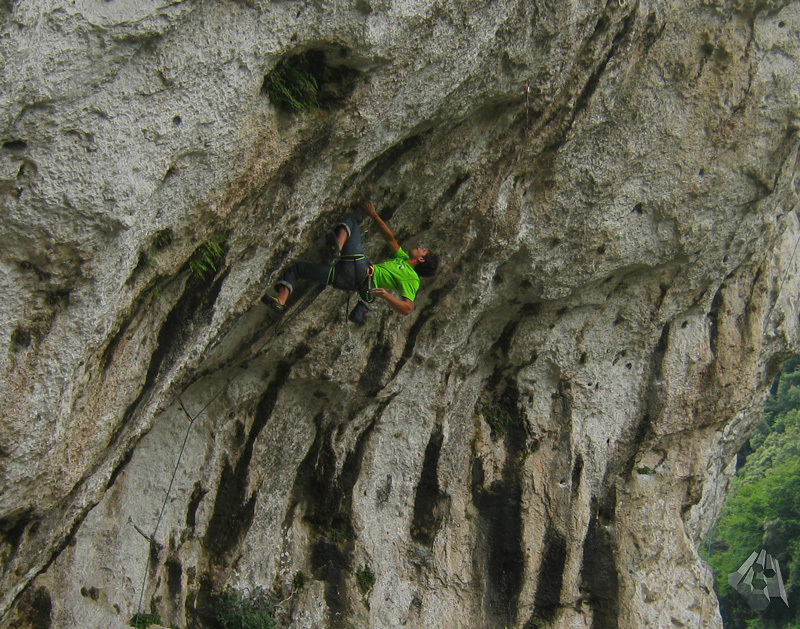 After Mt Weissmies I got back to Florence to my friends Ale, Dani, Lau and nice guy Giacomo.

The next days it was supposed to join Ale’s friend Filippo Romolli and climb the rock formation called Candalla close to the town Forte dei Marmi located on the seashore. Alessandro couldn’t join us again - being a professor of law makes your summer holidays to become into a nightmare with endless students.. The next day with Filippo, Paulo Pucci and Marta (Paulo’s dog) we set off to Candala Bassa. It’s the lower section of Candala rocks, the upper one is called Alta. The guys told about the specifics and conditions of that rock formation: the rock has no good friction and it even gets less when the humidness in the air increases.

After the dinner the huge dog of Beatrice took us for a walk all over the streets of Forte dei Marmi. The streets were full of Russians. They said the basic property owners here are rich Russians. I tried to distinguish any Armenian speaking but it looked like our oligarchs hadn’t attacked that paradise yet ))

The next day we went to climb again at Candala Bassa. Filippo met me with Tommy Ferri, who picked me up to Florence later and took me to the bouldering gym which they say is the best in Florence. Roberto Bagnoli, the manager of the gym, was a cool guy. Hearing that I’m going to visit to Arco for the World Climbing Championship, he contacted to IFSC president Marco Scolaris and arranged a meeting there, to talk about the perspectives of the membership of Armenia in IFSC.

Finally Ale got some free days to climb. Previously it was decided to go to Val di Mello and Val dell’Orco to climb granites but due to limited time the locations were changed into Alpi Apuane and Val Pellice. On the Monte Corchia west face, in Alpi Apuane, there are several mutipitches that Ale aims to climb. That time he had done 5 lines there.

We decided to do the combination of ''Per Un Pugno di Spit'' and ''La Volpe e la Folaga''. That’s completely 150m line with hardest pitch 6a. The route was sport, so you go confident there without any trad gear. But what you meet there are rusted anchors and bolts, some 40 years old pitons and plus plenty of loose rocks promising to fall on Ale's helmet if you relax a bit )).  In the evening Ale's face expressed complete satisfaction with the 6th line on Monte Corchia!

Now it’s the time for Val Pellice. With Mose we started another 6 hours driving. Val Pellice, located on the border with France, is a nice place for any kind of mountain activities started from Ice and Mixt climbing, Ski-tours or Heli skiing during the winter and climbing on the gneiss rock formations in the summer. The first day destination was the mountain refuge, right in the heart of the valley, called Jervis Hut. The owner Roby Boulard is Ale’s late friend who is also the president of Piemonte Mountain Guide Assocation. Several days ago before our arrival there, Nicolas Favresse was hanging out there with friends bolting a new 8c+ or higher project.

One hour of hike up by gorge took us to Jervis Refuge. Before the dinner with Mose we managed to climb couple of routes close to the hut. The next day was completely rainy. Busy guys Ale and Mose couldn't wait anymore and went down. I decided to stay there one more day with a hope for a good weather to climb with Roby. And yes! On the third day we managed to climb several routes set up by Roby before I left for Arco to watch World Climbing Championship.

Oh, almost forgot the most important: the food at Jervis Refuge is AMAZING!