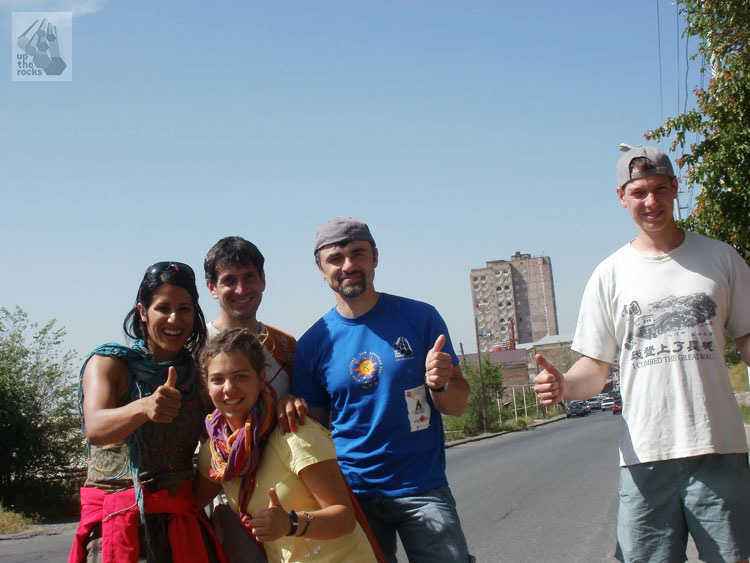 With the end of the Festival our motivation didn´t end! We saw so many lines, still unclimbed that we decided to spend one more week in Armenia for more first ascents!

After two days checking out the rock in the north and destroying more and more Andranik’s car ;), we decided to go back to Arpa gorge to climb some more routes in these beautiful columns! With a lot of baggage we started our way from Yerevan in a crowded maschrutka! After half a day we arrived in Arpa: So nice to see kilometers of columns! Impressive! Already from down we were looking for some nice cracks!

But first we had to cross the big river… The only possibility: a half destroyed wire-bridge! The adventure already starts here and wet shoes are for sure included!
On the rocks we added two more lines in two days! Two super beautiful cracks going up until the top between the columns (Good bye Tricam 6b, Grigri Guide 7a+)! With only one rag of cams it was not so easy to make them save…
And then….changing place! Once again to Noravanq gorge to make some new multipitch lines! The people there were really happy to see us again and we had lots of fun trying to communicate with them! Luckily we had our translator Mkhitar with us J…
The next day started with rain, so we enjoyed to sleep a little bit: We already felt tired after so many days of first ascents! But the rain didn´t stop! So the best we could do was checking out the lines. Four times we packed our gear for climbing, but always it started raining… So we had to accept that this was the first day we couldn´t climb because of the weather! We decided that one day in three weeks is okay ;)
The next day rain again: Noooo.. it was our last day and we wanted to climb again! So when the sky got a little bit clearer we started directly! We climbed two nice pitches with only few raindrops, but a really heavy backpack! The drill had some kilos and after one and a half anchors an empty battery!
When we were down again, we were really tired but soooo happy! It was THE END of a really nice trip with more first ascents and lots of fun! It is definitely not our last time in Armenia! Thank you Mkhik and Ando for another nice week with some more first ascents!