Written by Mkhitar Mkhitaryan, Published: 31 May 2010 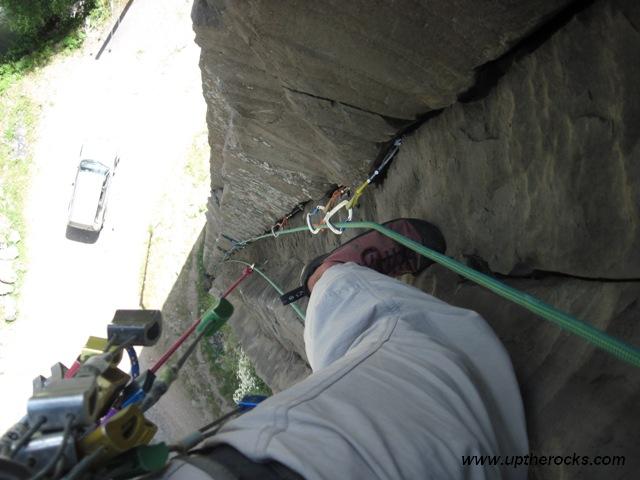 Well, all the guys who I have sent a message via facebook, to go for climbing on Sunday, where not in the planned venue.

Actually I thought that it happens quite often they say "..waw lets go to climb, let us know when you go.." and on the certain day they are all busy. That's why I took my "Kong" absorber before leaving home, to have it instead of belayer ;) The weather was excellent and I was motivated enough to my first trad-solo. My last free solo was on 2003, when I just started climbing. Those times I saw Patrick Edlinger's free solos and imagined myself that I could do the same. And doing some 5.7 20m crags once I appeared on very hard overhanging relief from where I crushed 12m down the ground. After a year treating I thought that it is the time to start to learn how to climb!

I guess I could find a belayer if I would call some more friends up in the morning, but today it was the day to be alone and to push the limits a bit away. All it went amazing, just to much playing with Gri-gri, heavy rope and chocks - trying to use those as much as possible as I had a lack of middle size cams for the moderate crack.
After I did the route I found myself that nothing extraordinary had happened, and no limits where pushed. I did hold the gear a lot... damn, real limit pushing is to free solo the route!
Anyway, the rock shoes are dead, no chalk and I'm going to go for a good vacation from rock climbing for an undefined period...