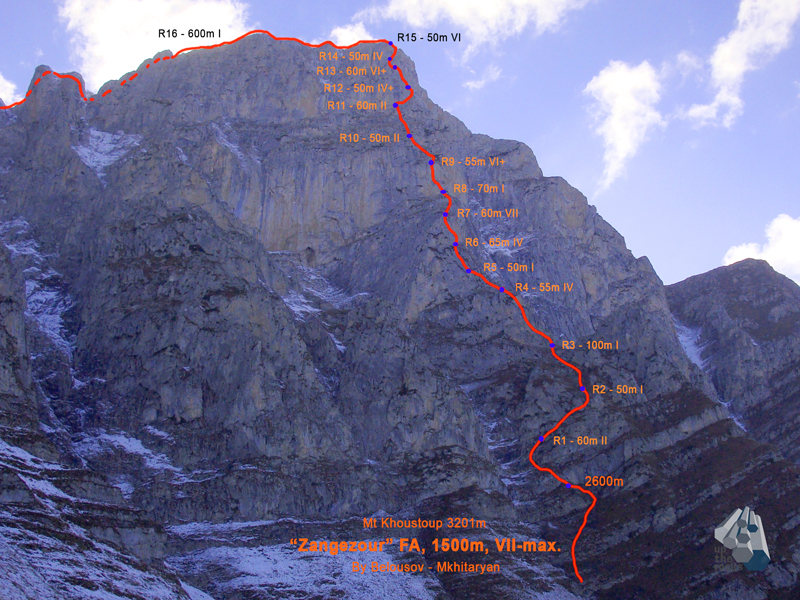 In the night of Oct 24 we met with Vladimir Belousov in Zvartnots airport, Yerevan.

After a  chance to sleep few hours we started our log journey through the different offices in Yerevan. We hoped to set off to town Kapan, on the bases of Mt Khoustoup afternoon, but as in usual, reality doesn’t meet the hopes and we left Yerevan around 23:40..

350km drive through the dark shouldn’t be boring with a friend, who with there are lots of adventure stories to share, and not only – Vova decided to give me a “Mountain Driving Lessons” that he had learned in Switzerland which Swiss people used to learn in Armenia..

Around 5am we arrived town Kapan, where again, we were lucky to have a chance of 2-3 hours sleeping in our car. At noon we already got the shepherds camp on the slopes of Khoustoup, in a desperate fog! According to our express schedule we had at least to find the start of our route (the base of the buttress of NE wall of Khoustoup) the same day, to start the climbing on early morning of Oct 26 (Vova had to be at the airport at 20:00 on 27th!). Well, no problem, like two mountain foxes guided by their good scents, through milky white clouds, traversing frozen steep slopes, sometimes 50-60 degrees, we suddenly appeared on our Start Point, and as a price for a good work the sky opened above, and tick clouds went down to our feet!

Back at our shelter (shepherd’s summer cabin), we found two guys from town who came to the mountains to gather strawberries and rouses. They chopped wood, burnt the stove and treat us some tea. I was pleased to spend one of the nicest evenings under candle lights discussing with these bright minded anarchist guys. For sure in this discussion Mr Putin could no way skip some “nice” words addressed to him, which caused Mr Belousov to make some hectic gesticulations, but being a hard core guy he survived after all.

Hard to believe we had that chance to sleep couple of hours our third time already!

Oct 26th, 3:30am, the alarm rang, the mountaineers started to unzip lazily their sleeping bags, and VOILA! the candles are on, the wood is doing heat in the stove, and one of our nice friends is putting hot tea for us. Can't say about Vova, but I felt honored to be appreciated (even cause being a mountaineer) by this Free Spirited man..!

8am, after 6km steep slopes traverse we are on the base of our line at 2600m, all ready to climb! “Let me go the first pitch” I asked Vova, “Let me do it..” Following Vova the first easy pitch, and surprised by his manner of fast and protection less climbing, where I would put a gear, I realized that if we don’t want to make a cold bivouac on the wall, then he should lead the rest too..