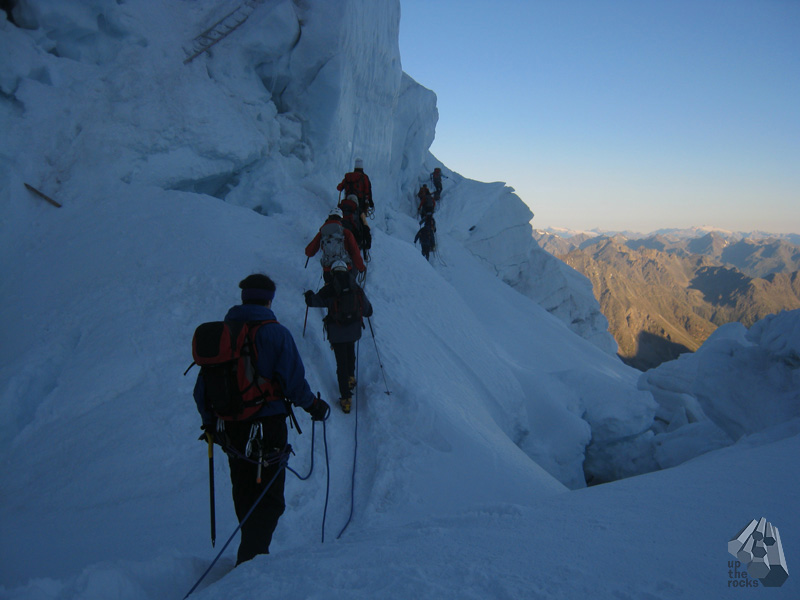 The stories from series ”D” are about one of my Dreams that came in true: I mean that’s the first climbing trip of mine In Europe.

The initiator of this trip is Aessandro Simoni with his nice family Daniela and Laura, who had visited Armenia last year for holidays and climbing.  So, from July 1-20, I was invited to Italy to climb there and as well in Swiss. The first 3 days of the trip was funny but the way much exhausting: miraculous Prague, amazing time in Rome thanks to Camilla, Tonia and Luna (and to couchsurfing for sure), launch with Simoni family under the heavy rain in Florence, unforgettable flamenco concert in Genova by Mose and his friends, driving to Swiss and finally the mountain hotel Hohsaas at 3200m. There I had the first 6 hours sleep since the trip was started.

The next morning at 4:30am after the short breakfast we packed our backpacks and got on the classic route of the summit Mt Weissmies (4027m). Honestly the route was simple enough to call it mountain hiking but not climbing. On the beginning of the glacier Triftgletscher, we found a large amount of groups going to climb the summit by the same route. Likely more than 300 people have summited that day, which is not something extraordinary in Alps but it would be in Armenia.

Now a bit about our group and climb: Mose and Marko form Genova, the friends of Alessandro, were very funny and nice company. Our group leader and guide was Marco - an experienced mountain and glacier climber.  When we were starting to get tied I offered to go first in the link, but our Marko strictly refused ''no, no, no.., going the first is NOT GOOD!''   :O

Well we had a nice trip to the summit by the glacier with a beautiful view to the mountains around. All the way our guide Marco was extra careful so thanks to him nobody of us suffered and we got the crowded summit. After taking some pictures, enjoying 360 degrees of amazing view of mountains we heard Marco's command to start the way down. ''On the way down the beginners should go the first in the link'' the guide turned to me ))).  And well, the result was the safe and sound trip to the hotel at 3200m.

In the climbing shop in Saas-Grund I found Five Ten “Neutons” with a great discount – 40Euros! Marco seeing me buying these shoes started to give me some prompts like:

- Are you crazy? Everybody knows that Swiss is not the best place for shopping, the best rock shoes brands are Italian, you will find it much cheaper when we get back to Italy..

He said it the way so calm and confident that I was confused and put the shoes on its place. But luckily in few seconds I came to myself from Marco’s hypnosis and took the shoes.