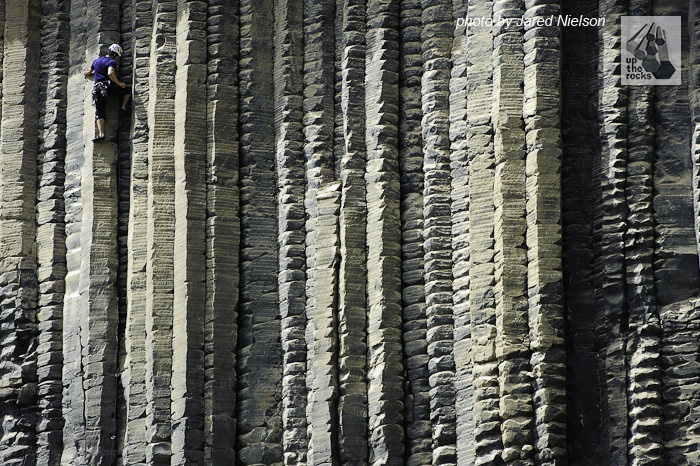 In the morning of May 29, the crew set off to Garni Gorge, the last destination of the Festival where basalt columns were waiting for climbers.

(The basalt column rock formations in Garni and Arpa Gorges are considered Natural Monuments and “Up The Rocks” club got the permit to “Clean Climb” on these formations during the Festival from Ministry of Nature Protection). At noon climbers hiked down the gorge to the rocks from the campsite, which was located on a small plateau on the Visitors’ Center in Khosrov Reserve. Spending at the Garni Gorge rocks recent days, Jared Nielson, Jason Stevens, Will Nazarian and Katy Anderson had already developed some projects there. Particularly, JJ sector was found by Jared and Jason, and Will and Katy had been developing new amazing lines on both sides of “Doudouk”.  Nasim Eshqi started a new route at the same sector where Doudouk is located. For the rest of the day, climbers worked on the projects and repeated the existing lines.

The next day, May 30, both Alexeys from Russia did two FAs on JJ sector. On the same sector Will Nazarian did the “Snakeskin” and finished his projects “Airivanq” and “Knot Doudouk” on the other sector. Carolina and Nasim finished their project naming it “Up The Rocks”.  Another two FAs “AnDoVenture” and “Spitak is rescued” were completed by the girls on the sector JJ.

In the morning of May 31, after a short climb of the existing routes and excursion to Garni Temple (1st c) and Geghard Monastery (13thc) group returned to Yerevan.

At the evening the enclosing party started reporting the event results-slideshows. “The Maple Leaf Company” shared gifts to the participants and friends who have helped in organizing the event.

Attention – the routes marked NC* mean No Chains (or rappel slings) at the anchor. Due to lack of the resources we could provide only bolts and hangers to the event participants to put an anchors on the pitches they did first ascents. For the rappel, prussics on the anchors were used. Do not use the same prussic on the anchors when you climb those routes, put your own prussic before rappelling! Up The Rocks club will appreciate very much to the organizations or individuals who would donate some chains and rappel slings to attach them on the existing anchors!