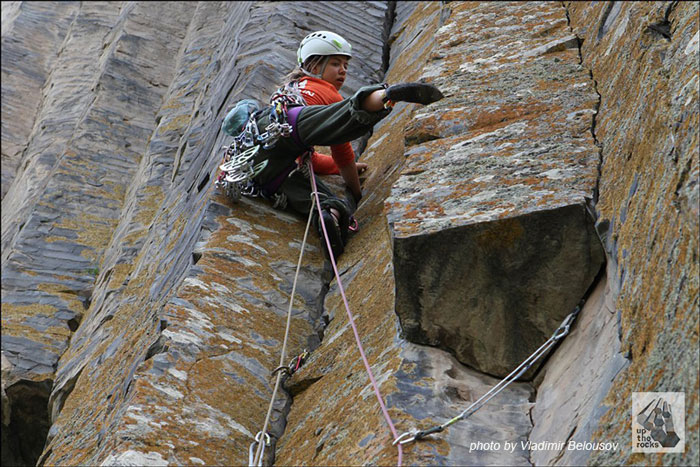 In the afternoon of May 26, the event crew set up the camp on the plateau above Arpa Gorge, one of two basalt column natural monuments of Armenia.

(To climb on these rock formations during the Festival only by “Clean Climbing” discipline, “Up The Rocks” club received permission of Ministry of Nature Protection.) The campsite was not set on the spot it was initially planned. Due to flooded river from recent days’ continuous rains, it was not possible to cross the river walking to set the camp at the small field below the Devil’s tower. So, we camped on the plateau above the tower from where we needed just some 5min hike down to the base of the rocks. To get to another climbing section, 800m up by the river from Devil’s tower, we just need to drive along the river there and to cross Arpa River by the wire bridge.

A small excursion to Gndevanq Monastery (10thc) made our guests to feel the cultural aspect of the area very well. Afterwards, some went down to check the rocks and lines for the next day climbing, while others did some slacklining.

In the morning of May 27, Vladimir Belousov started with FFA of the route “Eagles aren’t home” which was first ascended by Mkhitar Mkhitaryan on the previous Festival. Aleksey Antonov and Aleksey Adamov started warming up on Alex Chabot’s “Pencils” 6c+, whereas Nasim Eshqi and Caroline North climbed new line “Find the Pleasure”. During the rest of the day other existing lines were repeated.

Three more beautiful lines were initiated next day, on May 28.  After crossing the gushing river by wire- and branch-made bridge, being secured by rope guard rail, the climbers started hiking up the slope to the rocks. Vladimir Belousov did “Short trip”, Caroline and Nasim did “2 girls in dreamland” and two Alexeys, from Russia, did “The village hour”.

In the afternoon the crew returned to Yerevan. Another destination was waiting for the climbers for the next day. That was Garni Gorge with the similar basalt column formations!

Attention – the routes marked NC* mean No Chains (or rappel slings) at the anchor. Due to lack of the resources we could provide only bolts and hangers to the event participants to put an anchors on the pitches they did first ascents. For the rappel, prussics on the anchors were used. Do not use the same prussic on the anchors when you climb those routes, put your own prussic before rappelling! Up The Rocks club will appreciate very much to the organizations or individuals who would donate some chains and rappel slings to attach them on the existing anchors!