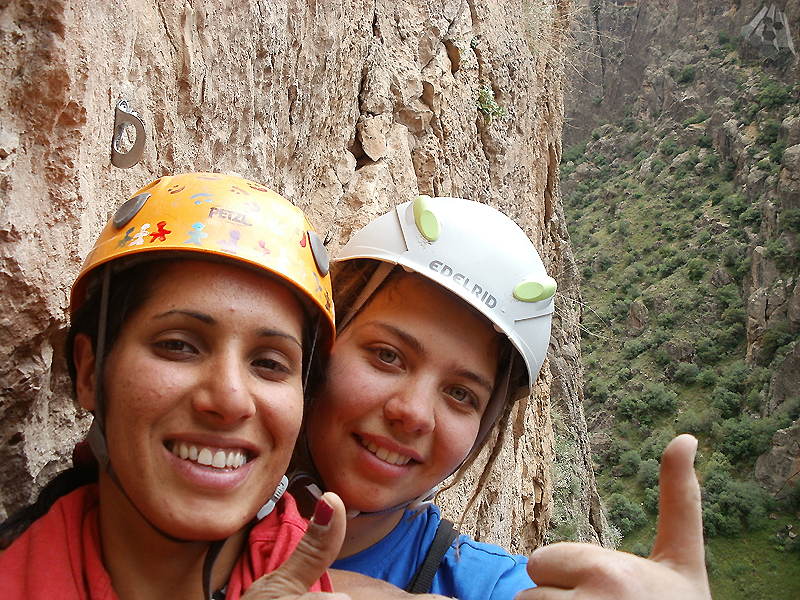 We got to Noravank Canyon in the afternoon of May 23. After a small rest and shower participants walked through the canyon to check out the rocks and choose the lines for the next day’s climb.

In the next morning, May 24, everyone got its site chosen in the previous day. Some got ready for ground up drilling of new routes, some for trad FAs and others just for warm up and feel the specifics of canyon’s limestone specifics. Jared Nielson and Jason Stevens bolted 2 single pitch lines. Later Jason made the FA of that line. Nasim Eshqi and Caroline North did FA trad single pitch then FFA of “Moon Fish”: two pitches of trad line completed by Mkhitar Mkhitaryan, Richard Krcmar and Vaghinak Sirekanyan during the Festival 2009. Aleksey Adamov and Aleksey Antonov were intensively warming up on the existing sport routes. Will Nazarian and Katy Anderson started exploring the potential of the canyon for some beautiful lines. On the other hand, local guys Andranik Miribyan, Vahe Tamamyan and Vardan Qosakyan did warm up on sport routes. In the afternoon, Andranik Miribyan and Vahe Tamamyan on-sighted  “Moon Fish” and continued the line to the top adding the third pitch to the line.

The evening finished at the cave restaurant in Noravank Canyon. The owner of the restaurant Vardges is a good friend of the climbers in the canyon and being there you can always rely on him.

In the next morning, May 25, Carolina and Nasim started their day on the new trad line “Jo.Si.To. girls’ power”  an impressive 165m four-pitch line. Some parts of this onsight climbing were done under slight rain and on the wet rocks. Jason Stevens has bolted another route and did the FA, and Jared Nielson climbed his new line bolted in the previous day. Both Alexeys from Russia did another FA on a beautiful single pitch crack in the chimney right on the side of the plate that shows the direction of the town “Eghegnadzor”

In the morning of May 26, a small cultural tour to Noravank Monastery (13st c) was organized for the participants, after which we directed to the next destination: Arpa Gorge to trad climb the amazing basalt columns.