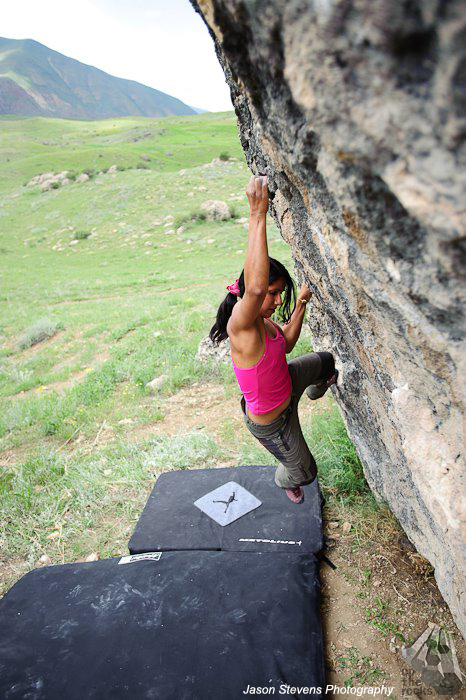 This amazing bouldering site, on the slopes of the mountains above the Chiva village, was discovered by Jared Nielson. It’s located some 15km closer than Noravanq Canyon when you drive from Yerevan.

There are countless boulders with a huge potential of hundreds of bouldering problems from V0 to V8 and higher. There are two large flat areas among the boulders which may serve as campsite. The area is somewhat isolated from the nearby village and population. However, some 200m of off-road will get you to the asphalt after which 5min of drive will lead you exactly to the village. There you can buy food and fill the water containers to hang out at the bouldering site for next day. Surrounded by the mountains, you get a miraculous view of them on the background.

We got to this campsite in the evening of May 22. It was a small surprise for the event participants to have another location and rock formation during the event, where they could do some bouldering first ascent. From the other side we had an opportunity to estimate the potential of the area by the feed back of the event participants.

At midnight Andranik and Gri-gri(Grigor) drove to the camp with a B-day cake for Aurelia Schwartzman. On May 23rd, she turned 25! From the next morning till afternoon we climbed several bouldering problems on some 5 boulder blocks close to the camp. Couple of attractive lines remained as projects due to time constraints. In the afternoon the event crew went to Noravank Canyon.

The list of FAs of the bouldering problems at Chiva Blocks