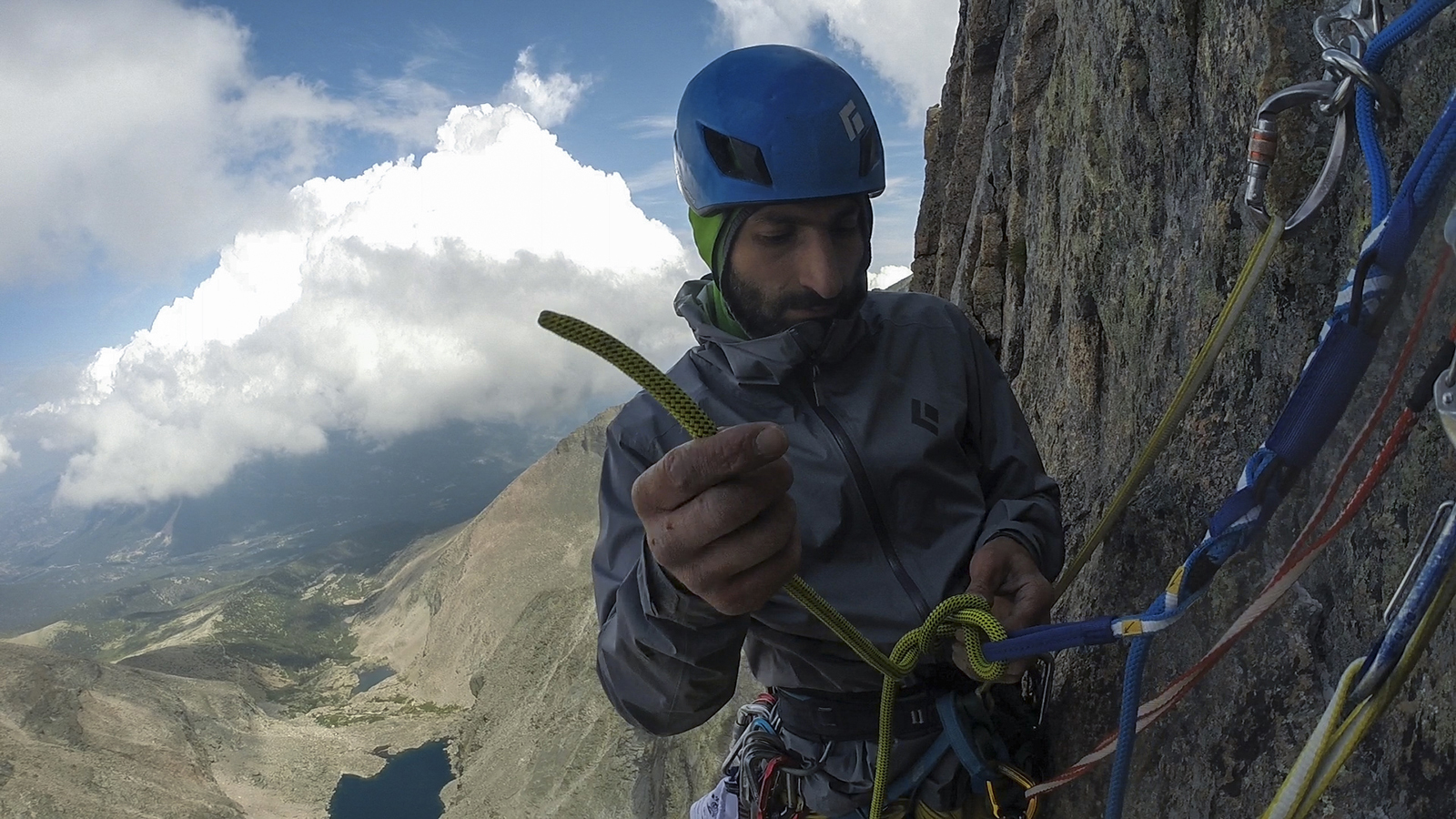 Third year in a row traveling to American West from the other side of the world for rock climbing, could you really wish anything better from this life?

It seems like Jim Donini drastically changed my life when in 2016, with a group of friends from the American Alpine Club, he invited me for a climbing trip to the US. When you experience the US climbing culture which has been an inspiration for so many climbers around the world when you meet iconic people there and when you add classic climbs in your tick list year after a year, you can call it a change in life if you are a climber from Armenia.

Since we climbed The Nose with Nick D’Hulster in May 2017, the idea came to do the Salathe Wall on El Cap together, so I knew that I will be back this year again. Even my Armenian buddies Vahe Tamamyan and Andranik Miribyan, who moved to live in CA, followed me to Yosemite for doing some climbs after hosting me in LA.

Well, that badass Nick D’Hulster was already nesting in the valley this season and had done a bunch of climbs including solo climbing Leaning Tower before I came to Yosemite Valley. Meanwhile, I was standing there like an amateur after a long ski season. We went for cragging first day and sure I hung on the rope like an old lady when touched a 5.10d Yosemite rock as for a warm-up route. The next day we went for a day-attempt to the Lost Arrow Spire Direct, 15 pitches grade VI 5.8 A2+ big thing. Not your mother’s best choice to start your climbing season again, so Nick had to lead everything up to pitch 10. It was already past 6 pm, five more pitches but we decided to rappel down cause even if we could finish the route in some 3 hours we still didn’t want to rappel all this big stuff in the night.

During the rest of our stay in the valley, the forecast didn’t promise us three days of stable weather, a sufficient time we needed to complete the Salathe Wall. As typical for these days you could climb till afternoon then storms would come. So being considerable with our climbing tempo and respectful to the elements of mother nature we had to step back from our plan. Our routes split with Nick then, till we would meet in Colorado again for climbing in Boulder Canyon. Meanwhile, I spent some time in the valley doing Armenian cragging with Andranik and Vahe, slowly feeling better on jamming in the cracks. With Adranik we did the Serenity Crack, classic 5.10d with pretty bold start where you can put your first pro only above some 8 meters above the ground climbing slicky sketchy flared pin cracks. It was cool to see Ando being so psyched for his first multipitch in Yosemite.

Soon Armenians had to leave the valley, they have families so couldn’t afford dirtbagging anymore, while I extended my stay in Camp 4 to celebrate my bachelor status. That was already May 19, the day when we agreed to meet with Jim Donini at Lower River Amphitrite at Jim Bridwell’s memorial. After three days of climbing cracks and chimneys, I was going to chill and rest for couple days to recover bloody skin on my hands and knees. Apparently, I didn’t know what does the Bridwell memorial mean to be.  It doesn’t make much sense to bother you with the names of all legendary climbers who came to share and hear old stories with Jim Bridwell.

But I want to tell about this atmosphere beneath huge granite walls of the valley, with a sweet smoke of marijuana (which is forbidden in National Parks) symbolizing the day of solidarity in between park rangers and climbers, freaky stories about Bridwell’s vision on the climbing perspective during Golden Age of Climbing in Yosemite, and the inspiration and energy he radiated through his projects and first ascents, mostly made under the influence of constant use of drugs. At the end of the event native American old women blessed the crowd with an Indian shaman songs and dance in the smoke of burning cluster of some vegetation in her hand, people were following the instructions of the ceremony given in prior, and I suddenly woke up with an idea like “what the hell am I waiting for.. I should go for Steck-Salathe this night”. The Steck-Salathe is another Yosemite classic grade V, 15 pitch 5.10b climb on Sentinel Rock, about which you can often hear weird stories of runout tunnel chimney pitches.

The valley shuttle came late and slow, it was dark when I got to Camp 4, broken and tired, still with bleeding hands and knees, the day was not rest at all. I started to ask people around, who would like to wake up at 3am to climb Steck-Salathe (for the approach to the base of Sentinel Rock you need more than 2 hours to walk up the steep and some technical slopes). Finally, I found a young Canadian guy Alejandro Aquino, we have met before at Sentinel Creek. He was psyched to link up with me, even though it would be his first big route. I knew he did not realized how sustain and intense will be the day, but I was too mean to tell him more on the details, this guy was my chance..

After we sort out the gear and agreed to meet at 3am at my tent, I went to Michael Dom’s campsite to get some betas for the route. The tribe was missing John Sloan this year, but the mood was there. These days Michael was belaying Brad Gobright on El Corazon on El Cap, as Brad was working on freeing it and they were discussing their tactics for the next days. “Actually, I underestimated Steck-Salathe when I climbed it the first time” Brad told me. I realized he said it rather to make me considerable about the route than it was a deal for him, he could even have free soloed it I think. After Michael perfectly described me all the betas, he even drew a cool map on a piece of paper for me like a real artist, I happily went to my tent to have three hours nap till the alarm would wake me up.

But the problem is nowadays Camp 4 is like a “Zoo”, as Donini calls it. It’s rather crowded by tourists, this folk usually have some easy hikes during the day, then they chill out till late night drinking at a campfire. I turned from this to another side in the sleeping bag, checked the time it was 1:30 am, and smoked some weed desperately. That was a good solution, it blended their campfire light and zoo noise into a harmonic orchestra, through which I could see me climbing all the 15 pitches of Steck-Salathe including the chimneys. In the dark, it seemed more like a trip to the moon though..

Completely recovered in an hour, whispering a couple of words under our headlamp lights with Alejandro, we quickly left the campsite. We were already on the first pitches at dawn. My concerns came true when, I think after the pitch 9, Alejandro gave up and said he does not want to switch for a lead anymore. Well, struggling through the fancy claustrophobic runout chimneys we made it to the top of Sentinel Rock when it was still light, but the way down we had to find through the dark and despair..

After recovering the last days at Mark Chapman’s duplex in Yosemite West, Donini took me to a traditional US tour, this time through unbelievable beauties of Tioga Pass by his brand new 4Runner. The old wolf drives as cool as he climbs and I had to wait till Utah to switch for a drive and score my miles. A couple of more hours and we finished our Yosemite-Ouray 840 miles day-drive at Jim’s place where lovely Angela hosted us with a nice dinner. After a couple of days of sport climbing in Ouray and visiting Telluride, where the Mountain Film Festival was going these days, we drove to the mysterious Black Canyon, “the Yosemite with an attitude” as Jim calls it. Last time we were there with Jim two years ago, then we climbed Russian Arête. The days were already too hot in Black, the only shady climbs Jim could find were Maiden Voyage and King Me. My dreams about the Scenic Cruise and Astro Dog are still living there.

Next, and for me, the last stop in the US, was Boulder Co. After climbing the south face of Petit Grepon in Rocky Mountain National Park, Jim left for Ouray to prepare his 1978 Latok-I expedition slideshow after which they would travel to Pakistan Latok-I base camp to cheer up 40th-anniversary attempts of international expeditions.

Well, life in Boulder is as it is, they call it the capital of rock climbers in the US, and that is true. A lot of famous US climbers are from Boulder or nearby, and many others have spent years living there. That’s to honor to fascinating climbing culture in Eldorado and Boulder canyons, Rocky Mountain National Park which is 50 min drive from Boulder.

And Boulder is much nicer if you have Thomas Engelbach and Brooke as big bro and sister who would take care of you. Another luck is to have Thom as a guide, he has climbed so much around Boulder and RMNP. Our deal on the weekends was to climb till noon when extreme hot or rain would come, which means it’s the time to smoke and get high without ropes, then the true storytime would come. That is another topic I like to write an article about one day, that bold trad climbing culture in Eldo and Boulder canyons, going back to Royal Robbins times.

Some climbing in Movement gym during the week, some concerts in the bars of Boulder nightlife are really good for your health, but I caught myself feeling homesick and dreaming of Armenian limestones..

But the intense flow of climbing life and events in boulder didn't let me down. On Jim Donini’s Latok-I presentation I had a luck to meet Jeff Lowe, after a month he would end up his powerful and dramatic journey, simply described as Metanoia, in our dimension. It was a great moment to have Chris Weidner say “you guys are money” when taking our picture on rappels of the way down from Longs Peak. That day we climbed Pervertical Sanctuary in 22 hours, from Boulder to Boulder, with Thom Engelbach. And finally, it was cool to climb the Casual Route in haze and hail with a great friend Aram Hovhannisyan from Florida. We tested Beal Escaper rappelling with a single rope The Diamond wall all the way down, without even using the Escaper before. Aram was in a panic a bit but he survived it.

Overall this trip was like a dream escape from Yerevan’s incredibly hot summer, with some projects in mind to drive me back again next year.